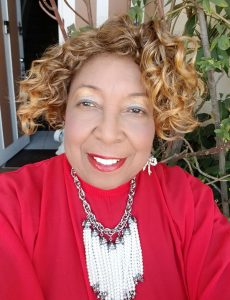 “VISION IS THE ART OF SEEING THE IMPOSSIBLE.”

Alene Brown-Harris is the newly elected 2022-23 Chair of National Congress of Black Women (NCBW), Los Angeles Chapter. Ms. Brown-Harris is a lifetime NCBW member of and serves on its National Board for the past 7 years.

Ms. Brown-Harris is a 1970 graduate of Alcorn A&M University (a historically black college) where she earned a Bachelor of Science degree in Business Education. Brown-Harris’ mother always told her to “Reach for the sky, and whatever you achieve will not be taken away from you.” That was great advice for a young black child growing up in the rural south; Brown-Harris knew she had to work hard, set goals, and meet challenges. She also knew that quitting was not an option.

Brown-Harris has served as Chaplain, Financial Secretary, Treasurer and 1st Vice Chair of the National Congress of Black Women, Los Angeles County. She was the first woman and first African-American hired as a laboratory technician at the Chevron Refinery on the Gulf Coast. Brown-Harris received the highest score on the special aptitude exam in Chevron’s history. Her primary job duties were to test jet fuel (JP-4) for commercial jets, aviation gasoline for small aircrafts, Navy special fuel oil (NSFO-NATO) for submarine ships, transmission fluid, diesel fuel oils, motor oils and many other types of raw products governed by ASTM procedures.

In 1972, Brown-Harris transferred to the Chevron/El Segundo Refinery where she held several key positions including Lab Technician, Trainer, Lead Tech, Lab Supervisor, Payroll Supervisor, SOX Coordinator, Policy 530 Coordinator and Relief Plant Manager of Distribution Center in El Segundo, California. Brown-Harris traveled to several parts of the world in her work capacity, training new employees in various lab procedures and leadership positions. In 1980, Brown-Harris was promoted to Laboratory Supervisor where she was responsible for a multi-billion-dollar budget. In 2008, after 38 years of service, Brown-Harris retired from Chevron. Currently, Brown-Harris is a licensed realtor and a mobile notary public.

Alene Brown-Harris believes strongly in serving the community and has an impressive list of volunteerisms. She has helped raise money for the Boys and Girls Clubs of Carson; American Cancer Society/Susan B. Komen, Relay for Life and has donated generously to Sickle Cell Awareness Campaigns, sending special needs children to Camp Moon and as a Girl Scout leader in the City of Carson for 18 years. Brown-Harris has served as the Chairwoman of Carson Parks and Recreation Commission, President of the Carson Women’s Club, First Vice-President of the NAACP Carson/Torrance Branch, Top Ladies of Distinction (Area VI) and Treasurer of several community-based organizations. In the last capacity, Brown-Harris worked with the Community Empowerment Forum and the Office of Federal Student Aid to further the mission of the White House Young America Series whose goal is to bridge former President Obama’s vision and that of the Millennium Momentum Foundation, Inc. with the needs of America’s youth.

Ms. Brown-Harris Harris has an impressive list of personal acknowledgments and accomplishments. While attending Alcorn A & M University, Alene pledged Kappa Alpha Psi Sweetheart (Silhouettes). She is featured in the book, “Come Sunday Morning – African-American Women Worship in Style;” In 2012, Brown-Harris was

named Extraordinary Woman of the 55th Assembly District and in the same year, she was a California Delegate for the 44th Democratic National Convention in North Carolina. In 2010 Brown-Harris was recognized as Female Democrat of the Year, receiving the Franklin & Eleanor Roosevelt Award and was appointed Co-Chair and Board Member of “CAPRCBM,” California Association of Parks and Recreation Commissioners, an agency comprised of recreational professionals from thirteen Southern California cities. Also, in 2010, Alene was recognized as “Woman of the Year Award,” for 64th Assembly District. Brown-Harris’ hobbies include collecting old coins, home decorating, gardening, bowling and traveling. She has traveled to many interesting and exotic places and looks forward to her continuing to travel to destinations across the globe.

Brown-Harris is married to Bennie Harris. They have two daughters, Nakita and Shanta, and are the proud grandparents of twins, Asiah and Isaiah. The Brown-Harris family are members of and regularly attend Resurrection Church Los Angeles.

Without a doubt, Alene Brown-Harris, definitely an inspiration to everyone whose lives she touches.